Isolation and gene flow in a speciation continuum in newts 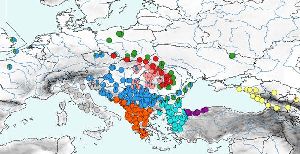 Because reproductive isolation evolves gradually, hybridizing lineages inform us about the role of gene flow during speciation. We delimited nine evolutionary lineages, reconstructed the phylogeny and inferred gene flow in newts of the Lissotriton vulgaris species complex. Post-divergence gene flow, indicative of evolutionary non-independence, has been most extensive in Central Europe, while southern European lineages have acquired the hallmarks of independent species. Widespread mitochondrial introgression followed secondary contacts. The study reveals long-term persistence of evolutionary lineages and periodical genetic exchange between them: although some lineages may become extinct or fuse, others carry signatures of this complex history in their genomes.