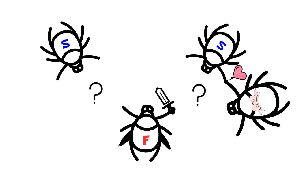 Mate-guarding (a situation in which male prevent guarding female from rivals) is known to evolve in response to environmental changes. We have used Rhizoglyphus robini, a bulb mite in which aggressive, armoured fighter males coexist with unarmoured scramblers, to examine how aggression risk shapes guarding behaviour. Exactly speaking we investigated whether mate-guarding by scramblers is affected by the presence of aggressive fighters. First, we show that indeed guarding male is under higher risk of being attacked than those non-guarding. Using both natural and artificially selected populations we show that males guarded longer when fighters were absent. Comparisons between lines selected for the high or low proportion of fighters and their source populations indicated that scrambler morphs evolved prolonged guarding. We also showed males can not actively shorten guarding in response to the presence of fighters in a social group. This indicates mate guarding may evolve in response to the presence or absence of fighters in populations, but males are not able to adjust guarding behaviour to the risk of being attacked by fighters.